It’s really kind of sweet when we see a tall guy and a short girl as a couple. Heck, there are even a lot of memes on Facebook which says, “boys like girls who are shorter than them”.

But as a petite-sized girl who see most boys as taller than me, I wonder.. are they really cute or am I just way in my head over the whole thing? Well, guess what, science says short women and tall men makes the happiest couple!

And it’s not because our heads are leveled at the right height to kiss or that we feel small and secured when they embrace us in a hug, it’s also the perfect height to have sex. 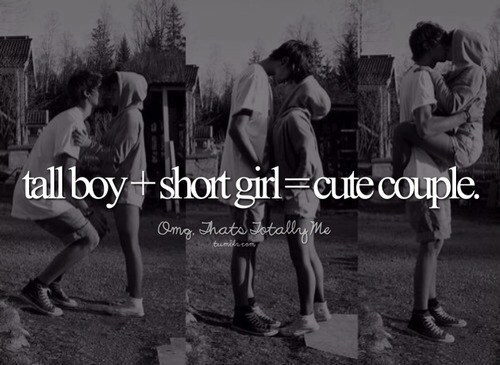 A study published in the Personality and Individual Differences found that women often prefer taller men and this was reflected in their mood. Kitae Sohn, a professor of economics at Konkuk University in South Korea, did the research with 7,850 married women and confirmed that the greater height difference between husband and wife, the higher the overall happiness levels the wife was reported to be.

Well, unsurprisingly, this has everything to do with evolution, biology and psychology.

Males and females have different physical and mental characteristics and are commonly larger in stature than women. During the evolution, men have been protecting and providing their mates and children since prehistoric times. It is thought that when a man is taller and larger than his mate, it is an indication that he’s strong and dominant, hence able to protect the family. Sure, it isn’t the stone age anymore but it very much explains why women likes her man big. Just the thought of burying your head perfectly to their chest makes everything feel alright!

A previous study in 2004 found that the taller you are, the more you earn! In fact, the study even stated that a person who is 6 feet tall is predicted to earn nearly $166,000 (RM 678,194) more over the course of a 30-year career than someone who clocks in at 5 feet 5 inches. Apparently, the reason on why taller men have financial perks is because, employers sees tall men as more trustworthy and more capable. Alternatively, the researchers say that tall individuals may be more likely than shorter folks to put themselves forth as leaders. Let’s be honest, who doesn’t want to be someone who has a stable (very, very stable) income?

Oh yeah, scientists from Princeton found that height predicted success even among kids as young as three year old in cognitive ability tests. They hypothesize that taller people are more intelligent than shorter people. The paper suggests the link between height and cognitive ability is that certain biological growth factors like the thyroid hormone simultaneously stimulate growth and neural development. But this also applies to tall girls too.

At least to women! According to dating ads, 49% of women want their men tall. The figure then increased to 55% when they were asked open-ended questions related to attraction. The reason why taller dudes are considered more attractive than shorter men could be due to greater life satisfactions as they have higher self-confidence. No wonder why we always drool at basketball players.

But hey, that really doesn’t mean shorter men can’t make you happy! Another research found that men who are 5’7″ or below do more housework, less likely to get divorced and are active in sex! Who wouldn’t want that, eh?