If you’re planning to get knocked up in a couple of years, you’re in luck because Budget 2020 just made some serious announcement. 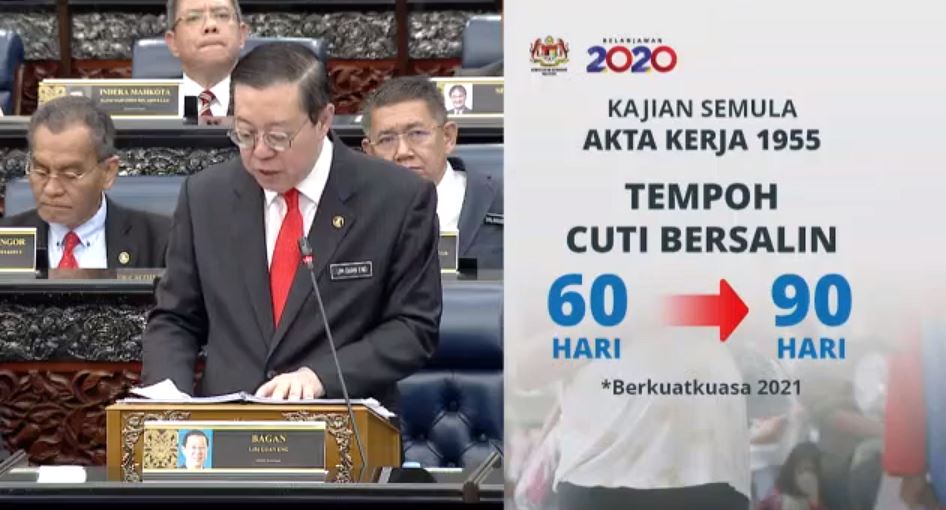 On 11th October, Finance Minister Lim Guan Eng announced that the period of maternity leave for government employees will be increased from 60 days to 90 days. Woah, that’s a huge deal for future mothers! This will however only be enforced in 2021.

Well, as you’ve guessed it, women everywhere were thankful for the good news.

Current 60 days of maternity leave is optimised but 90 days would be ideal and recommended.

1) Irregardless normal or C-sec or whatever type of delivery, the mom just literally gave birth to a human being, after 9 months of carrying the baby around.

Then you will know why 90 days is a blessing

She said during the interview with Astro Awani, “It (maternity leave) has some goodness in it, but it also has its negative impacts – because I think having a woman of the workforce for three months is a little bit too long. She may go out of touch really quickly, and I’m also very concerned that this move would actually deter more employers to put women at high ranking positions.”

I’m not excited because it may be a double edge sword and work to a disadvantage instead. This doesn’t mean I don’t support the 90 days maternity. I never made such a statement. I was merely looking at the issues from multiple perspective with the interest of women not to be discriminated or loose out from this effort instead. Hoping I won’t get misquoted or misinterpreted again. Not Excited = Tidak Teruja Not Agreeable = Tidak Setuju Two entirely different statements altogether. #Belanjawan2020 #SenangkanYangSusah

She explains, that she didn’t want women to lose their ability to compete in the workforce and to avoid employers from choosing men to be in higher positions as compared to women.

Christy added that the third month of maternity leave should be focusing on flexible working hours as it will be hard to look for a part-time replacement to fill in the position and it will also lift the burdens of other colleagues.

Shocked by Christy Ng’s statement over this, Twitter vocally gave their opinions over her comments.

Bukannya hari ni pregnant esok terus beranak. The company (or the department manager) has 9 months to plan their biz operations and manpower should any of the female staff would be on maternity.

If 90 days leave affect the biz then I’d blame it on the manager or HR department https://t.co/eIbOHGp3MW

Even Hannah Yeoh, Deputy Minister of Women, Family and Community Development said the request was “most basic & minimal” in which we’re really “not asking for the sky”.

90 days – most basic & minimal. Not asking for the sky. https://t.co/AqxajHMdtZ

We totally understand where Christy’s coming from but at the same time, pregnant mothers may have different views on this issue. What are your thoughts on the extended maternity leave from 60 days to 90 days? Let us know!

Eateries, Markets & Petrol Stations To Operate From 8AM-8PM In Second Phase Of MCO

Teh Too Panas, ZAP, Zoom

According To John Legend, Here’s Why He & Kanye Aren’t Friends Anymore