Most Outstanding Outfits At Golden Globes 2019

It’s the 2019 Golden Globes and Hollywood totally brought their A game to the annual event with their stunning designer outfits. The event took place today (7 Jan 2018) at the Beverly Hilton Hotel in Los Angeles.

Indeed, it is a big night for some of the stars like Constance Wu, who is up for her first Golden Globes and Lady Gaga with two nominations which include Best Actress. So it’s a no wonder these celebrities totally dressed for the part.

Here are the outstanding red carpet looks from the 76th Annual Golden Globes.

Lady Gaga stunned the crowd in a tribute dress to Judy Garland who wore the gown in the 1954 version of A Star is Born. She wore a beautiful, custom periwinkle coloured, Valentino Haute Couture gown with voluminous-sleeved cape. Gaga then completed her look with Giuseppe Zanotti platform heels and decorated her neck with over 100-carats of Tiffany & Co. diamonds. So glam!

Emily Blunt strutted the red carpet in a metallic toned high-collar strapless Alexander McQueen gown with cutout embroidery. We love the top part of her dress but the bottom cutout was quite a miss, as it kind of looks like our mom’s tablecloth – but we still adore you, Emily! 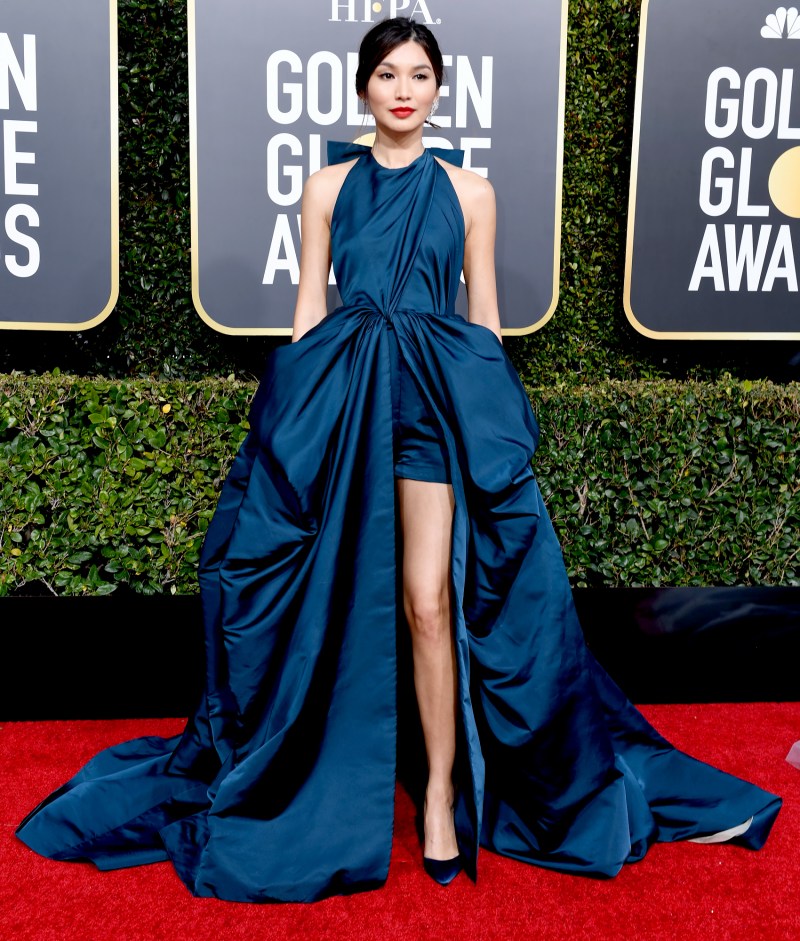 The breakout star of the award’s nominated film, Crazy Rich Asians, had heads turning with her bold, navy peacock gown from Maison Valentino Couture that features a high-low hemline. She also showed her legs in a pair of blue Christian Louboutin heels. 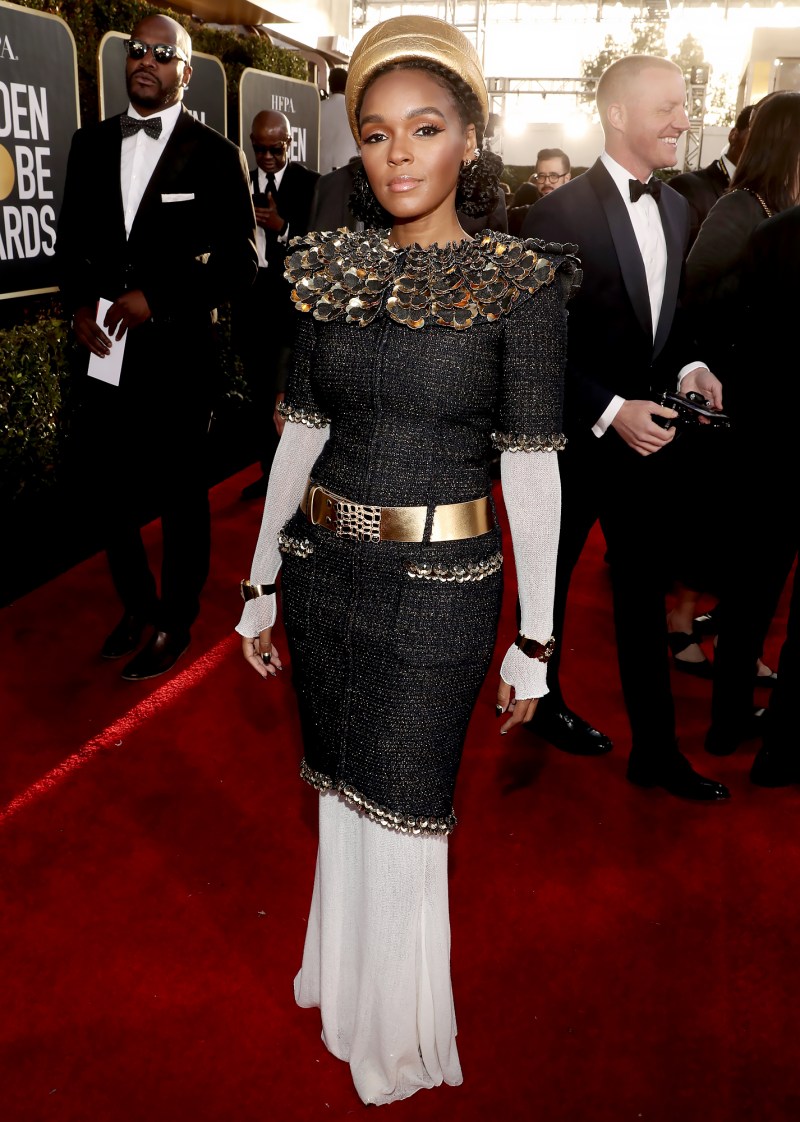 Hidden figures star and one of the award’s presenters, Janelle Monae wore a polished embroidered black and gold tweed dress with large feathered collar, layered over a long sleeve knit dress. She paired it with a gold feathered cap. The whole look was done by Chanel and honestly, we’re confused. Monae’s style totally brought some medieval/avant -garde to us. Not sure what battle she’s preparing for.
5. Constance Wu 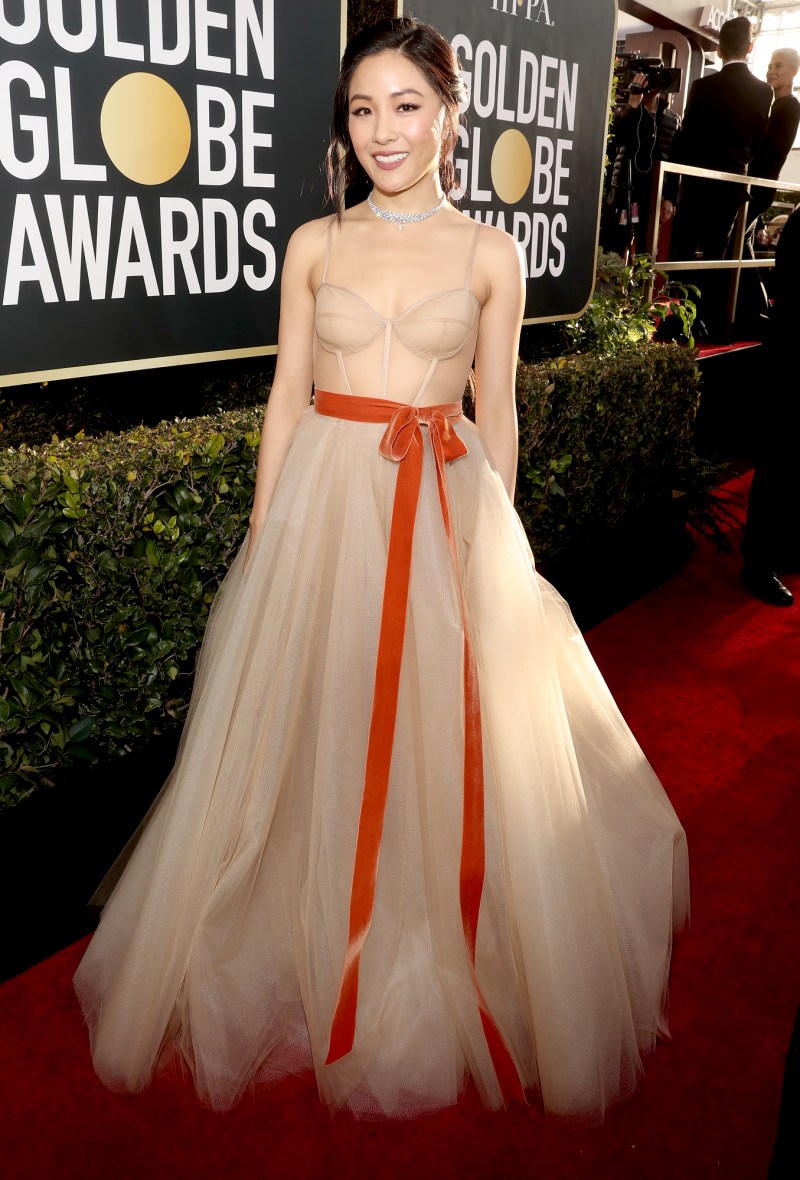 Constance Wu looked like a Çrazy Rich Asian in Vera Wang’s nude bustier tulled gown that featured an orange bow. Ahmayzing. We are totally living for this look!

Julia Roberts edged everyone else at the annual show in a smart Stella McCartney creation. The outfit had a delicate tulle top that featured a floor-length train, paired with a black skinny tuxedo trousers.