If you think that it sounds gruesome, well, yes. That’s the sick reality of snakeskin production in the fashion industry where innocent snakes are being made into expensive, high-end, exotic-skinned python bags, belts, shoes, boots and wallets. Limited in quantity and extremely rare to find, it’s become a status of symbol in the fashion world.

However, as enchanting as they may look, this whole process hides a world of illegal trade and animal abuse that’s often ignored. At least 440,000 pythons are slaughtered every year in Indonesia, Malaysia, and Vietnam in the name of fashion. The process of creating snakeskin products aren’t that glamourous though

The python’s head are smashed with a mallet, hard enough to stun them. Their jaws are wrenched open and a hosepipe will be shoved down their throats. From there, their bodies are filled with water and tied at both ends. This is done to bloat the pythons like a balloon to be skinned — alive. 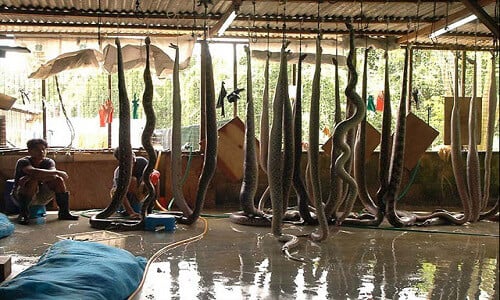 Because pythons have low metabolic rates, they may not die easily even after the whole monstrous process. It will take a few days of torture and excruciating pain before the pythons die of shock or dehydration.

According to BBC, Southeast Asia exports around half a million python skins each year, which is estimated to be valued at $1 billion. PETA also mentions, “For every animal who is legally killed for the exotic skins trade, another will be illegally poached.”

While there are still some luxury brands who opt to continue selling snakeskin items, plenty of other brands are taking a vow to end the production of snakeskin.

Couture company, Chanel which previously sold handbags, coats and shoes made from snake, alligator and stingray skins finally announced that it will no longer use exotic animal pelts in the future. Designers Vivienne Westwood and Diane Von Furstenberg have decided to follow suit as well.

Do you think authentic snakeskin is okay or should we just opt for faux snakeskin? Let us know!